The dream of every parent is naturally to see their children in a high position in society. To fulfill this ambition especially in now a day’s scenario it’s all goal-oriented fixed aiming way of providing them education and carving their personality. To pave this pathway with minimum struggle and less possible tension it’s the basic duty of the parents to identify the right center (or) institution which focuses on the overall development of the child.

Here it’s a very sensitive and important issue to note down that, it’s not only the education but also the personality growth which keeps the pace of the child throughout in achieving the goals.

Keeping our goal to be in a very high position in the society means, not just feeding them with high pressured education, stressing them with regular tests, making them panic by seeing their progress/ranks cards, but it’s the basic duty of the parents that they should identify the potential of their ward.

The field of interest of the child to be identified at the early age of the child itself thus the parents should first make a blueprint of their child’s potential. Then comes the discussion regarding the institution to be selected. The parent's duty will be fruitful when only they could identify the right institution which is designed to awaken the inner energies of the child with an overall developmental approach.

This the circuit of making a child a good student will come to a crucial junction.

India again concerning now a day’s scenario is a canvas with lots of career opportunities. And of course, it’s the administrative line which offers the desired high position. It’s very prestigious for one to be called as IAS/IPS/IRS/Group-1 officers and so on.

Just imagine you being called as father-mother of that IAS officer, the feeling that creates full fineness and the happiness that waved in the heart. All this will not be a game of a day simply. It’s the long long struggle both and on the parent's side as well as children’s side with the help extended from the sincere institution concerned.


Above all, as already discussed, it’s the right plan at the right time with the right decisions. Thus after critically verified and find the potential of the child then it’s the next duty of the parent to chose the career after 10th standard.

Choosing a career after 10th:

S.S.C or 10th is the crucial phase of education for every child. The student is in teens, pursuing 10th exams well, there are lots of education intuitions promising so many surprising aspects. Having all these factors around them, now the parent's play begins. As discussed earlier, if the parents (rather now we can call as ideal parents) who are already predetermined with a clear plan of their child’s next education proceedings can easily identify the right choice of institution in their vicinity.

In addition, the parents should have a multi-level interaction with their ward explaining him/her the pros & cons of his/her forthcoming higher educations. We can say it’s just exploring the factual situation thus preparing him/her to pay concentration at studies.

It should not be forceful. Shouldn’t be the only goal or intention (or aim of the parents or even any of the parents), but it should be the overall team effort and final decision to join the particular institution with a particular field of studies. To consolidate there shouldn’t be compromising at any point in selecting career after 10th.

When it’s fixed for preparing for civils exams it’s very best suggested to have a basic foundation from inter itself. Thus we recommend Inter + IAS coaching classes. A student who is interested and happy with Arts subjects will complete his/her Intermediate education then joins a degree of his/her choice completes it successfully and then if he/she starts IAS (or) Civils preparation it will not help him/her with a special reference with today’s competitive scenario.

It will always be a catalytic factor to start civils preparation from Intermediate onwards. It’s not that the students to be stressed upon this goal, but to be aware of his/her target with enthusiasm to achieve it. 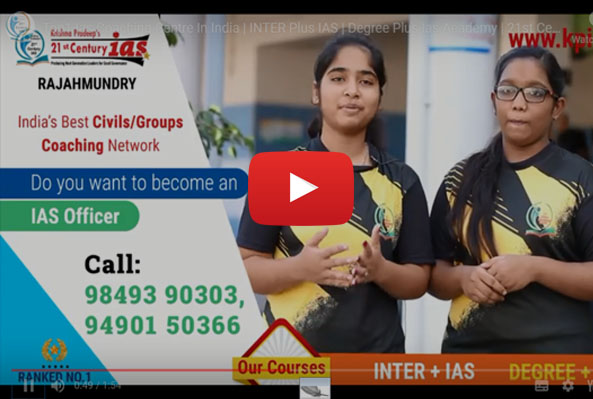